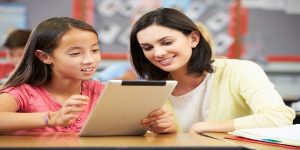 Introductions: Hi! I’m Sally and this is Tom. What’s your name?

This is Jeff and Diana’s first day at school. They meet Sally and Tom. Then they decide to go and have lunch together.

Dialog 2: Where is the lunchroom?

Jeff and Diana learn how to get to the lunchroom. It’s downstairs. Everyone is hungry.

In Part 1, the characters are introduced, including their names, ages, and grade levels. Their families are also described.

In Part 2, school facilities and their locations are described, including the music room and library.

This lesson focuses on family relations and familiar objects around a school, including windows, chairs and doors.

Family Relationships: his sister, her brother, their grandparents, etc.

Vocabulary: describing classroom objects and places, the window is open; the library, the music room

Possessive Pronouns: my, her, his, your, their

Subject–verb agreement: I am, she/he/it/they is/are She lives with…They live with…We can eat…The stairs are behind you. They are in the third grade.

Present tenses: The boy is going up the stairs. He has a little sister. They live with their parents. I want to eat lunch! We can eat in the lunchroom. Turn around!

Locations: on the first floor, at the school, in the lunchroom, downstairs

Spatial Relationships: behind, in front of, the stairs are behind you! near, next to

Comparisons: Sally is older than Diana.

Wh– questions: Where can we eat? Why do they want to eat? Who is Jeff’s sister? What is behind Jeff?

Order & Sequence: first, last, second, third, the last letter in her name; on the first floor.

Dialog 1: In the lunchroom

Jeff, Diana, Sally and Tom find a place to sit in the lunchroom. Then they say what they want to eat.

Jeff has a stomach ache. Diana says it’s because he ate too much. Jeff disagrees. Finally they decide to go outside and play.

In Part 1, the lunchroom is described. It’s open from 11:30 until 1:00. It has several different kinds of food and drinks.

In Part 2, the seating arrangement of the children is described, including relative location. Then we learn what they are going to eat and what they like.

Part 1 focuses on spatial relationships, including across from, behind, and in front of. Part 2 focuses on describing food. Part 3 focuses on simple actions and directions: “They are walking away from the door”.

Requests – Wants: I’d like a hot dog. I’ll have noodles.

Classroom actions: walking to the door, walking away, putting up her left hand, etc.

Spatial Relationships: across from, next to each other, near the window, on his right, behind them, between the two girls, on this side of the table, over there, etc.

Quantity: There aren’t any soft drinks. They have too much sugar. He ate some candy. They didn’t eat any candy.

Present tenses: are eating, are sitting, my stomach hurts, I’m feeling better. He always eats too much. He has a stomach ache.

Past tense: ate too much, didn’t eat too much, etc.

Wh–questions: What is Jeff going to eat? Who is going to eat a sandwich? What is behind Tom? Where are they sitting? When does the lunchroom open? Why does Jeff have a stomach ache? How many chocolate bars did Jeff eat? Who ate some candy?

Yes-No questions: Are there any drinks? Is there any fruit?